I’ve been thinking about photography. We’re just back from an overnight trip to Česky Krumlov, in south Bohemia, where we toured the home of the late-19th-, early-20th-century photographer Josef Seidel. Seidel made his name doing portraiture, panoramic views, and processing amateur film—a kind of turn-of-the-century Kodak shop. He equipped his relatively small, two-story house with rooms for developing and printing film, copying postcards, storing glass plates, making portraits, and selling images to the public. (There seems to have been precious little space left over for poor Frau Seidel and their three boys.) In his top-floor studio, Seidel and his staff captured the likenesses of their neighbors in Česky Krumlov—the newly engaged and married and born; people in costumes or on bicyles or posed at tables, looking studious; soldiers on their way to war and in need of a memento (one hoped it wouldn’t become a memento mori) for their families. 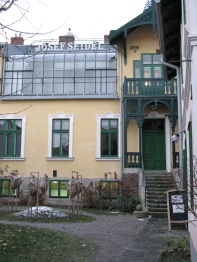 You can see Seidel’s studio from the street—a big, glassed-in enclosure that looks like a greenhouse and gave the photographer the natural light he needed in a pre-electric era. I found myself wondering what the neighbors thought when the building went up in the 1890s—Curious? Alarmed? Thrilled at the prospect of having their picture “taken”?

The verb is telling. In the early days of photography, many (including Balzac) believed the process of being photographed robbed you of some part of your being. Did the men and women who posed before Seidel’s canvas backdrops, who gave themselves to his lens, fret about what they might be losing in the transaction?

Do we? Even on a Monday afternoon in mid-December, Česky Krumlov’s cobblestoned streets and Baroque buildings were doing overtime as photographic backdrops for tourists, mostly Asian, who were compulsively taking each other’s pictures with smart phones.

I’d been reading Roland Barthes’s Camera Lucida on the bus ride down from Prague and kept thinking about his observation that every photograph contains “that rather terrible thing … the return of the dead.”

Maybe that’s why, offered the chance to have our portrait taken with a digital camera in Seidel’s 19th-century studio for a mere $8, I said no.

In the past, friends have urged me to “take a lot of pictures” when I travel. I seldom do (this blog is a stretch). I’m not a good enough photographer, and I find the business of taking pictures gets in the way of experiencing whatever I’m trying to experience. Barthes seems to have put his finger on that as well: “Not only is the Photograph never, in essence, a memory … but it actually blocks memory, quickly becomes a counter-memory.” Years of doing and seeing plays have taught me to relish what’s fleeting—yesterday’s visit to Josef Seidel’s house, for example; the long bus ride back to Prague in the blue of twilight; last night’s superb performance of a Dvorak opera in the city’s decadent bon-bon of a theater, the Národní Divadlo—images imprinted on my mind and nowhere else.