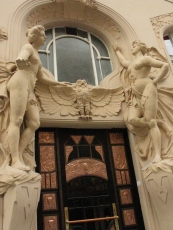 The last—and first—time I was in Prague, I learned to look up. (Credit actually goes to the young British tour guide who told us on day one to look up. “I have to remind myself,” she said.) The city is full of surprises one, two, seven, ten stories up.

This time I’m learning to look down. Credit my friend Irene Butter, in Ann Arbor, who told me a few months ago about the Stolperstein that’s been set into the pavement in front of the house where her father lived in Elmshorn, Germany, outside Hamburg. It’s a small brass tile inscribed with his name, year of birth, and the all-too-stark facts of his life and death in the Holocaust.

I found the tile earlier this fall on a visit to north Germany and photographed it for Irene. I’ve since read up on the astonishing Stolperstein project of artist Gunter Demnig, begun in 1994 in Cologne and now numbering more than 30,000 across Europe. These mostly obscure Stolpersteine, or “stumbling blocks,” mark the places where victims of the Holocaust—Jews, Roma, homosexuals, the disabled, members of the resistance, others—once lived.

Prague has its sobering share. This afternoon, as the day was sliding into an early dusk, I took a walk around our neighborhood and found maybe a dozen. I can only imagine the stories—the terror—that lie behind these small, matter-of-fact tiles sitting just inches from buildings that now house lawyers’ offices, banks, apartments, and—to my shame—the corner store where I’ve been buying groceries on my way home from the library. 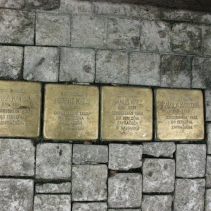 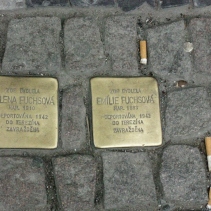 Irene tells us a woman in Elmshorn looks after her father’s Stolperstein, and I’d like to think people here do the same. One, belonging to a single man named Benjamin Rosenstein who died at Terezín, is sunk into the pavement on a street not two hundred yards from our apartment. Looking up from his Stolperstein, I see six windows in the kind of quaint, lopsided building that makes you take out your camera.

Can I imagine the man who lived here, my almost-neighbor? Born in 1886, died in 1942. The math gives me a jolt: 56, my age, when he perished—that evocative word Daniel Mendelsohn examines in The Lost: A Search for Six of Six Million:

“Perish … from the Latin verb pereo … always suggests to me a realm of possibilities far beyond the mere fact of death—a feeling that’s confirmed by a glance at the entry in the rather old Latin dictionary I own: To pass away, come to nothing, vanish, disappear, be lost; To pass away, be destroyed, perish; To perish, lose life, die … To be lost, fail, be wasted, be spent in vain; To be lost, be ruined, be undone. Given what I know, now … I have come, myself, to prefer perish over all other verbs, when I speak of those who died.”

Say a prayer at the sight of these little golden squares, so easy to miss. Remind yourself to look down.