Zlatá Praha, golden Prague, city of spires and bells. They go off at odd hours (less so in the winter, it seems, than summer, when they routinely woke me at 3 a.m.—or maybe it’s because the windows are closed now, and it’s harder to hear). But you hear them. Sitting at the kitchen table, reading, you hear a faint something through the skylight.

Because we’ve avoided getting Sim cards, we have no cell phones, and the land line in the apartment won’t work if wireless is plugged in, so we’re blissfully ping-free and can almost pretend we’re in another century, living lives clocked by belltowers.

Yesterday I saw a blue van parked in a median street near a tram stop. The van was filled with bells—brass bells, four or five of them, each a couple of feet wide. I have no idea why the van was there, or where the bells were headed. I went back this morning, hoping to get a picture, but it was as if I’d dreamt it. The van was gone. I can only imagine where, or which of the city’s spires now holds its cargo. Imagine being the driver of such a van—a person tasked, as in a fairy tale, with the job of delivering bells. I’m reminded of Brecht’s Good Person of Szechuan, with its poignant image of a pilot whose job it is to fly through the skies delivering letters—an image whose romance is now all but lost to us (the UPS delivery truck doesn’t come close).

Not long after we’d spotted the bell-man and his bell-van, we walked past one of Prague’s more famous monuments, the Powder Tower, in time to hear three musicians in Renaissance get-up play a trumpet fanfare from a crenellated rampart. It was around 2 in the afternoon, and there weren’t many people on the square below, and there was no obvious reason they were playing, but it somehow made sense in this sound-besotted town. (With a population of just over a million, Prague has three top-notch symphony orchestras, three opera companies, a major conservatory, countless ensembles, a serious early music scene, and god knows what else.)

For a while this morning I went chasing after blue vans, hoping to find the one with the bells. Eventually I realized I was following a van belonging to the Czech postal service. Without meaning to, I’d completed an imaginative circle: the postal service logo is a post horn, a musical instrument once used to sound the arrival or departure of the day’s mail. 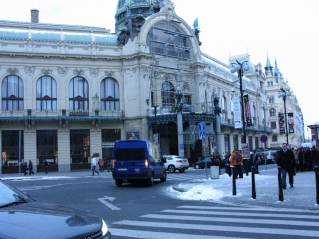 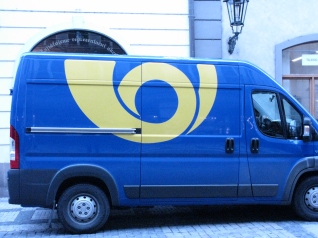