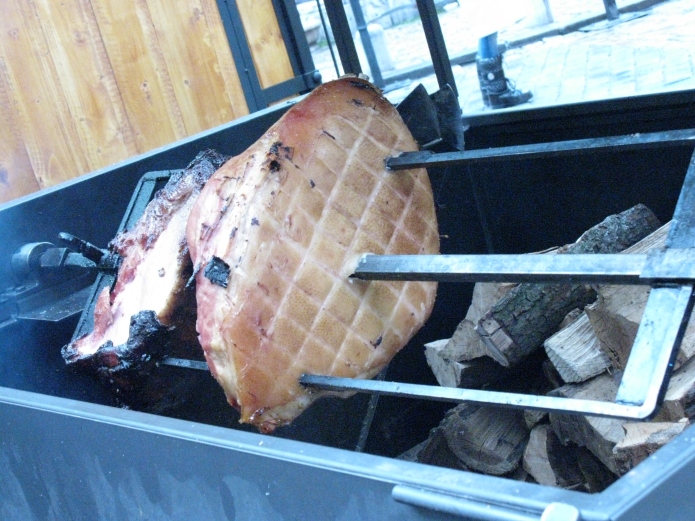 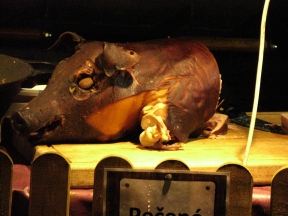 The Prague Post reports that among the nations of the world with the best prospects for a child born in 2013, the Czech Republic ranks 28th—lower than the U.S. (16th), higher than Costa Rica, Portugal, Poland, Greece, and Slovakia. (For the record, Switzerland comes in first.) Reasons for the country’s relatively low ranking include “a relatively poor diet, inadequacies in the health care system, high levels of pollution, and excessive alcohol and tobacco consumption.”

I can’t vouch for health care, pollution, or tobacco consumption, but I’ve consumed my share of alcohol in the past month, and I certainly find the diet a challenge. Even with a kitchen, it’s hard to avoid pork. We bought what we thought were pure bread dumplings at Tesco the other day, only to find them larded (literally) with pork. I won’t lie: they were tasty.

As I’m writing this, I’ve got a soup going on the stove, yet another concoction flavored by pork. We bought way too much bacon the other day, smoky, dense, and attached to thick ribs, and I’m racing to use it up before we fly home on Saturday. 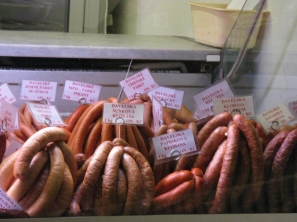 And so, as I render pork fat on the front burner, let me render homage to the noble animal whose flesh has done so much these past four weeks to enrich our diet (and apparently impoverish our health). Oh smart, inquisitive beast, quick to adapt and easy to accommodate, capable of living on small patches of land and willing to consume our garbage, oldest known domesticated creature besides the dog, prolific breeder and quick grower, yielder of what Charles Lamb called “a kind of animal manna” whose taste is no less than “ambrosian.” There is, writes Lamb,no flavour comparable, I will contend, to that of the crisp, tawny, well-watched, not over-roasted, crackling, as it is well called—the very teeth are invited to their share of the pleasure at this banquet in overcoming the coy, brittle resistance—with the adhesive oleaginous—O call it not fat—but an indefinable sweetness growing up to it—the tender blossoming of fat—fat cropped in the bud—taken in the shoot—in the first innocence—the cream and quintessence of the child-pig’s yet pure food. … 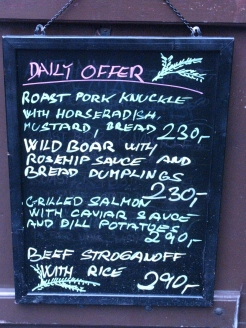 They serve pork every which way in Prague, and we’ve tried most of it—pig knuckle, Prague ham, sausage, pork roast, bacon, ribs, crackling, even the innards, which seem to have found their way into a thick orange soup I bought at the corner store one day, in a jar whose ingredients I couldn’t decipher. In my newfound devotion to the pig, I am reminded of the matanza I witnessed one January three decades ago in Spain, another pig-addicted country—the cleansed carcass of the hog displayed on a kind of trellis in the front yard of a farmhouse, women off to one side making blood sausage, men inside the house, in a firelit room, drinking red wine and eating the first links of cooked chorizo straight from the fireplace. They invited me to join them. It remains one of the best meals of my life.

The ritual of the midwinter slaughter is mostly a bygone thing, here as elsewhere, which is a pity. The likes of Michael Pollan would have us know where our food comes from, and a matanza surely does that (though I lack Pollan’s willingness to take the knife into my own hands). Even the man who invented Wilbur the pig—the sometime hog farmer E.B. White—sanctioned the kind of meals that, for better or worse, distinguish Czech cuisine.

“The scheme of buying a spring pig in blossom time, feeding it through summer and fall, and butchering it when the solid cold weather arrives, is a familiar scheme to me and follows an ancient pattern,” White wrote in his piquant 1948 essay on the death of a pig. “It is a tragedy enacted on most farms with perfect fidelity to the original script. The murder, being premeditated, is in the first degree but is quick and skillful, and the smoked bacon and ham provide a ceremonial ending whose fitness is seldom questioned.”