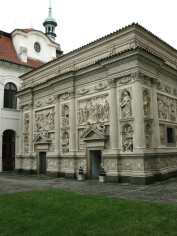 It stands, a marble-encrusted box in the middle of a cloistered space on top of a hill above a castle overlooking one of the most storied cities in the world, the place the mythical princess Libussa identified as Prague, a city whose fame, she predicted, “will touch the stars.”

The treasure within the cloister within the city is the Holy House of Loreto, believed to be the site of the Annunciation, miraculously lifted from its original location in Nazareth and borne through the air here to Prague in the 17th century. The layout and dimensions of the room (30 x 13 feet) come from Helena, mother of the Emperor Constantine, who in the year 328 identified and measured the original Annunciation site in the Holy Land. The room has been replicated throughout the world, some 50 times in the Czech Republic alone, where it helped reinvigorate the Catholic faithful in the wake of the Thirty Years’ War. I’ve only seen this Loreto, not the others. It is a mystical spot, even if you don’t believe in miracles.

It’s one of the treasures I’ll be looking for from the sky tomorrow morning as we take off from Prague on the first leg of our trip home.

Our Lady of Loreto is the patron saint of air travel, so our visit yesterday afternoon was perhaps a fitting farewell (though unintentionally so—I’d been meaning to go since the day we arrived but kept putting it off.)­

Years ago, after I spent a semester in New York as a college student, I wrote my name somewhere in the city—I can’t remember the location—intending it as a promise to myself, and to New York, that I’d be back. I’m older and less superstitious now, and I won’t be leaving any marks in Prague, unless it’s the heap of recycling I dumped into one of the city’s brightly colored bins this morning.

The other treasure house I’ll be hoping to spot from the skies tomorrow is the garret apartment where we’ve lived since November 30. It sits on the top floor of a five-story building built in the late-19th century as an add-on to the pink bauble known as the Kinsky Palace, which sits onOld Town Square, and whose front balcony was the site, in 1948, of one of the country’s bitterest junctures, evoked in the opening beat of Milan Kundera’s Book of Laughter and Forgetting (which I’ll be reading on the flight home tomorrow):

“In February 1948, the Communist leader Klement Gottwald stepped out onthe balcony of a Baroque palace in Prague to harangue hundreds of thousands of citiens massed in Old Town Square. That was a great turning point in the history of Bohemia. A fateful moment of the kind that occurs only once or twice a millennium. …” 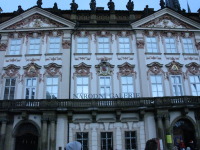 Restored by Italians in the 1990s and bought up by Americans and who knows who else (a friend tells us one in every six real estate transactions in Prague now involves a Russian), our building in back of Kinsky Palace is home to a tattoo parlor, some sort of high-end household-goods shop, a restaurant hawking pseudo-Czech cuisine to tourists, and five floors of residents.

I’ve lived here twice now and have come to love the sound of bells through the skylights, and the astonishing quiet of the place, despite its proximity to the loudest square in Prague, and the sight, through those same skylights, of jets soaring overhead to who knows where. Most of the time the plume of jet exhaust is gone before I can look up twice, a reminder of how quickly our journeys pass.

Writing of journeys in 1822, William Hazlitt spoke of how travel—the act of being by oneself in a strange place—invites thinking and reverie. I’ll miss that. Hazlitt has it right: in a strange place, even one that’s becoming familiar, long-forgotten things encroach, “burst upon my eager sight, and I begin to feel, think, and be myself again.”