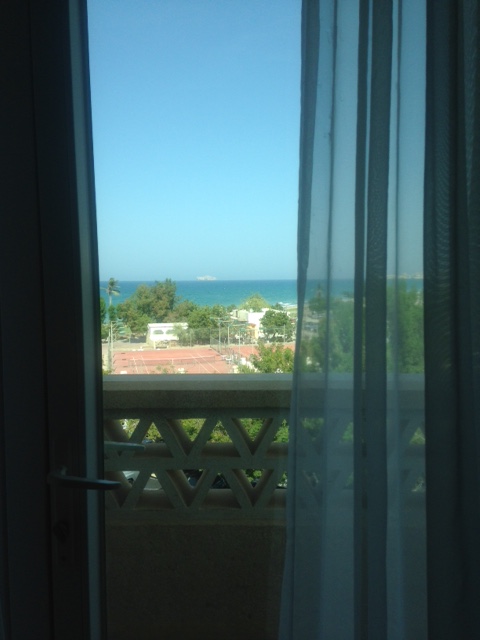 Through the window of my hotel in Muscat, Oman, I see the Gulf of Oman, which leads to the Arabian (or Persian, depending on your politics) Gulf. Off in the mists of the horizon sit a trio of oil tankers. They’ve been docked offshore for the duration of my visit here—four days and counting.

I’ve been thinking a lot about journeys—this one, which I didn’t particularly want—and journeys in general. My two grandmothers, maternal and paternal, both set their sights on the wider world, and for women born in the last years of the 19th century showed surprising travel mettle. One took tours to South America and Spain in her older age. The other moved with her engineer husband to the Caribbean in the early 1920s and spent the next 30 years there, raising kids on a sisal plantation in Haiti, battling who knows what illnesses and fears. I’ve inherited their wanderlust but not, it seems to me increasingly as I age, their apparently singleminded devotion to its pursuit.

I find it harder and harder to leave home.

I find the thrill of travel more and more elusive. My curiosity—that faithful driver deep inside the reptilian human brain—is waning.

So why go? In this instance, because the trip was more or less thrust on me. I said yes before I knew what I was doing, and here I am, in Oman, for a conference about cancer, which is its own unwelcome journey, of course, to use what’s both a cliché and a reality for the dozens of people I’ve met here—women, mostly, whose nobility in the face of their unwanted travels I find humbling. I’m here to talk about how stories can empower those who have cancer and those whose job it is to report on the disease, but it’s the stories I’m hearing that are teaching me.

As my flight took off four+ days ago, I thought of that term “liftoff.” You lift off from the earth and plunge like a needle through the clouds, and with luck into the clarity of a blue sky or a starpocked night. Maybe that’s what still impels me to say yes to these less-and-less welcome embarkations—the chance to lift off the mind’s clutter, shed the routines and rituals I take for granted, see those oil tankers on the horizon and know that we’re connected. To meet the intrepid women at this conference, voyagers who in so many ways remind me of my grandmothers: their passports stamped with the record of their travels and their travails, open still, ready for the next page.