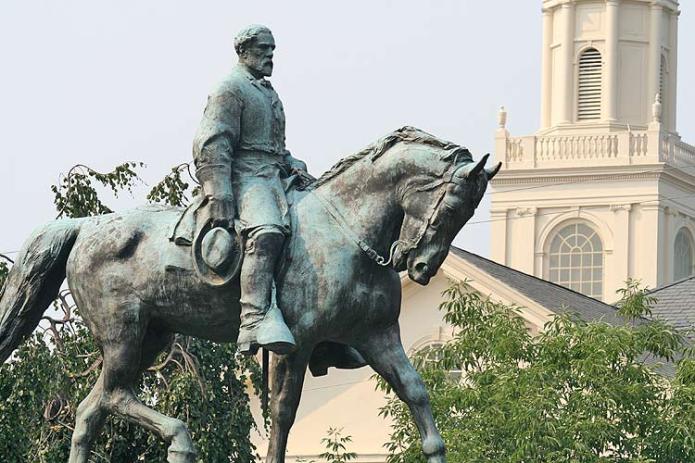 They bred such horses in Virginia then, horses that were remembered after death.

Head lowered, flanks stilled, the animal fixes his eyes on the red brick city where the boys are massing. The invincible boys, the gallant men behind their shades and shields. The ones who at long last, after all these years, have been fed and fueled.

No more waiting for rations or trains. No more shoeless troops, spent cartridges, empty trough. No gaunt faces and skeletal limbs. No retreat. (Remember how they peered up at you as you cantered past on the way to Appomattox. Remember how he paused in the midst of the dreadful ride to let you sip from a cool stream.)

All these years after the ivory flag, the inglorious exchange of letters and conditions, he sits astride you still, as if still posing for Brady, stalwart in his colonel’s stars and gold buttons not two days after surrender, unable to resist celebrity’s consolation prize. Never utter the word defeat. Speak instead of God’s hands, as he does. As they do. Mom, dad, the lanky brood with their buckteeth grins. All those schoolkids arranged in happy groups at your feet, gazing up in awe (or was it boredom) at the Roman face and gloved hands: the image inscribed in a thousand holy books.

All those quiet decades when the sword hung idle by his side. And now they’re back, flames in their eyes.

Feel the shift of his weight in the saddle, the familiar tug of the reins. You’d forgotten the fear, the urge to bolt. How he used to soothe you. How he ran his strong fingers along your hide, sponged the sweat, fastened the dove-gray coat and whispered sweet encouragements. Tightened the blinders and turned you toward the guns.

What is peace, after all, but a lost cause. Yoked to him like this, you know only fieldworks, picket lines, the swift and sudden flank attack, the fury of the uniformed brigades. The ones marching this way, tikis aloft.

Across the valley the enemy campfires flicker. Now they’re chanting the soft songs of brotherhood, the tender ballads. A child, weeping, begs to hear more. Her strange grace, floating skyward, reminds you of home, whatever that is. Reminds you of clover and bluegrass, the bobwhite’s call. Pillared house. Stabled lawn. The daughters with their fragrant skirts. The sons he sends, like you, into battle. Can’t we simply be, they cry. But he’s got fresh recruits.

All those years when you trusted. Raised your head and carried him forward. Watched him muster the infantry, mourn the dead, discipline the shirkers and stragglers. Watched him strip the ones who ran to their waists and order the whip. All those times you closed your ears, prayed for an end. But God, for whom two-thousand years (as you well know) are but as a single day, works slowly, and the master is nothing if not patient.

Once they loved you so much they built you a grave. Chiselled it with your name. Planted hyacinths and moss, as he did for his beloved. Who would believe you once threw him to the ground? Yanked the reins and leapt backward and flung him from the saddle, both wrists sprained. For weeks he rode in an ambulance while you followed behind. Remember how it felt to walk free. Remember how the wind grazed your back, the sun warmed your cold heart. Brave colt, noble steed, do it again.