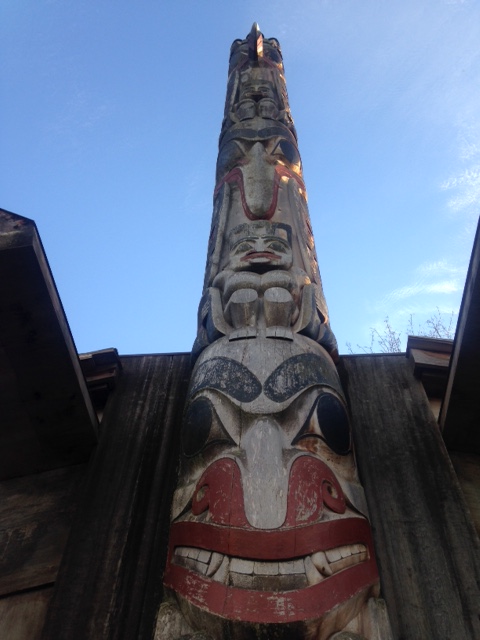 Here in Vancouver, on a brief (and surprisingly welcome, given my recent misgivings) trip, I’ve been looking at totem poles. Dozens of them at the Museum of Anthropology; a handful of contemporary ones in Stanley Park; and just today, at the Vancouver Art Gallery, painter Emily Carr’s enthralled and turbulent renderings of the totem poles she saw during her travels along the BC coast in the first half of the 20th century.

I grew up with images of them, as I expect most Americans my age did. But I’d never really looked at them until now—at the intricate and fluid metamorphoses that unfold up and down the length of an individual pole. One creature grows out of another, resides within another, emerges intact from another’s mouth or ears or loins. Animal morphs into human, human into animal. It is an inviting, prelapsarian world—an egalitarian Eden, summoned, literally, from nature itself: those massive cedars I saw yesterday in Stanley Park, the whirling blue-green trees that sent Carr into such spiritual rapture.

But it’s their ancestral role (and work) that most intrigues me. A marker at Stanley Park describes the totem pole as “the British Columbia Indian’s ‘coat of arms.’” Clans identify with totemic animals, and poles narrate family history. It’s a rich image, one I’m eager to milk as I continue to wrestle with my own family’s past. In the presence of these towering structures, I see afresh how the generations build on and spring from and nest within one another—how long-gone ancestors grow into enormous figures whose deeds cast thick shadows. Try though I might to build my own house, independent of ancestral influence, there they are: immense familial poles rising tall on either side of my front door, exerting their power, generating complications, reminding me whose I am.