The call went out over the weekend to mark the first anniversary of Vaclav Havel’s death on December 18 by wearing short trousers. I spotted a woman outside the library this morning in rolled-up jeans in what I think—hope—was a response to the call (though maybe she was just being stylish).

Later in the day, beneath the big statue of St. Wenceslas at the head of Wenceslas Square, I saw a man who’d obviously rolled up his pants legs in homage to the country’s truly beloved first president.

Back in December 1989, during Havel’s inauguration as president of Czechoslovakia, someone took a picture of him in trousers that barely reached his ankles. Havel later said he’d adjusted his pants during the ceremony, and the photo was snapped before they’d had a chance to settle, but a colleague, Jan Solc, who worked in the Czech president’s office in the 1990s, claimed Havel had a penchant for short trousers dating back to his years as a political prisoner. Every time his captors came for him, they’d shout, “Havel, make yourself presentable,” and Havel would hoist his trousers up. “He kept doing it the whole time he was locked up,” Solc said.

The intent of today’s tribute, as the organizers of “Short Trousers for Vaclav Havel” explained on an English-language website, was to create a “gesture that is humorous, non-violent but significant and perhaps even very Czech-like.”

Far more moving, though, was the small throng of people gathered in Wenceslas Square at dusk, lighting votives in the shape of the famous Havel heart (he always signed his name with a heart), piling slips of paper and more candles around a photo of Havel. Someone was playing guitar, and people were making big hearts from red balloons, and the whole thing had the flavor of the 60s—or maybe it’s because as I was leaving, I came across a much smaller memorial, with its own votives and supplicants, dedicated to Jan Palach and Jan Zajíc, two students who immolated themselves in this same square in 1969 in protest against the Soviet occupation of Czechoslovakia.

Havel was a reluctant politician who objected to the term “dissident” because he didn’t want to be seen as a “professional malcontent,” but rather as a person who was simply attempting to “live within the truth.” Two months before he became president, he told a friend, “I’m a writer, not a politician. I would like to be a kingmaker, but not a king.” In his first days as president he used a scooter to navigate the marble hallways of Prague Castle.

It’s easy to relegate much of what Havel did and said during his courageous life as a playwright and political activist to the gray Communist past of this part of Europe. But as I was reminded yesterday, reading his 1978 essay “The Power of the Powerless,” Havel has much to say to us about our own time, place, and the systems to which we pledge our allegiance:

“The essential aims of life are present naturally in every person. In everyone there is some longing for humanity’s rightful dignity, for moral integrity, for free expression of being and a sense of transcendence over the world of existence. Yet, at the same time, each person is capable, to a greater or lesser degree, of coming to terms with living within the lie. Each person somehow succumbs to a profane trivialization of his inherent humanity, and to utilitarianism. In everyone there is some willingness to merge with the anonymous crowd and to flow comfortably along with it down the river of pseudolife. This is much more than a simple conflict between two identities. It is something far worse: it is a challenge to the very notion of identity itself.”

“A person who has been seduced by the consumer value system, whose identity is dissolved in an amalgam of the accouterments of mass civilization, and who has no roots in the order of being, no sense of responsibility for anything higher than his own personal survival, is a demoralized person. The system depends on this demoralization, deepens it, is in fact a projection of it into society.”

“It may even be said that the more room there is in the Western democracies (compared to our world) for the genuine aims of life, the better the crisis is hidden from people and the more deeply do they become immersed in it. It would appear that the traditional parliamentary democracies can offer no fundamental opposition to the automatism of technological civilization and the industrial-consumer society, for they, too, are being dragged helplessly along by it. People are manipulated in ways that are infinitely more subtle and refined than the brutal methods used in the post-totalitarian societies.” 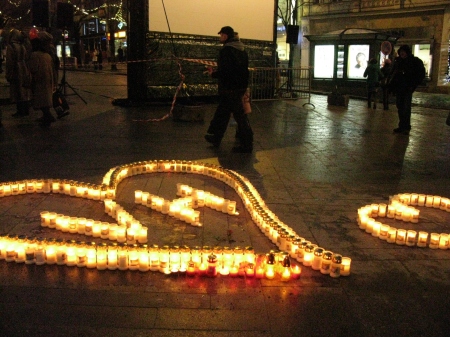