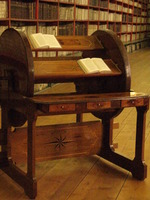 For the past two weeks, I’ve spent as many mornings as I can in Prague’s Municipal Library. It’s a five-minute walk from our apartment, across Old Town Square, which this time of year is crammed with holiday kitsch and bad food of the sort that makes me feel virtuous heading off to the reading room with my backpack and a bottle of water.

The Municipal Library is a mostly quiet place, built, I’m guessing, in the 1920s, with big open reading rooms on balconies at opposite ends of the building. Not every seat has an electrical outlet—a bit of a problem—but you can bring food and drink in, and check your coat for free. I wear ear plugs to ward off distractions and noticed a man my age doing the same the other day. Most of the people who come here seem to be doing serious work.

(One of the great pleasures of a European existence, however brief, is the chance to work in buildings like this. In Spain in the 1980s, I spent most of a month working in a Renaissance library in Granada. The librarian let me take breaks among the roses in the courtyard garden he also tended.) 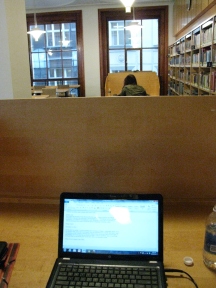 It helps that I can’t understand much of anything around me in the Municipal Library. In his “Library of Babel,” Borges speaks of “impenetrable books” thought to correspond to past or dead languages, of “dialectical” tongues and “incomprehensible” volumes “ninety floors farther up.” Scanning the shelves of Czech tomes to my left as I sit in my little cubicle pretending to write, I feel as if I’ve stumbled into a Borges story, where books are written in a “Samoyedic Lithuanian dialect of Guarani, with classical Arabian inflections.” As my Czech phrase book points out, it’s possible in this country to construct an entire sentence without vowels:

Strĉ prst skrz krk. (Stick your finger through your neck.)

“The universe (which others call the Library) is composed of an indefinite and perhaps infinite number of hexagonal galleries,” writes Borges, who was himself a librarian. The sentence begins his “Library of Babel,” which I found by Googling “libraries in literature” in the universe we call the Internet.

I thought of both Borges and the Internet today when we visited Prague’s Strahov Monastery, whose two extraordinary library halls—one theological, one philosophical—date from the 18th century.

To peer into either is in some sense to peer into the human mind, with its crannies and nooks, its rows of compartmentalized knowledge doubled up against one another, its airy heights and dark cupboards, its thirst for the divine and insistence on reason, its devotion to beauty and fascination with the macabre. (The corridor outside the Philosophical Hall is lined with curiosity cabinets. “That’s the first hammerhead shark I’ve seen in the Czech Republic,” my husband remarked as he surveyed the rather gruesomely dessicated contents of one cabinet.)

Also on display: book bindings from the Strahov collection, including a bejewelled Bible; breviaries; a parchment map showing Europe as a virgin; an illustrated account, in Czech, of an early expedition to the New World; geographical and astronomical globes; an ingenious “book wheel” that lets scholars compare as many as a dozen volumes simultaneously … 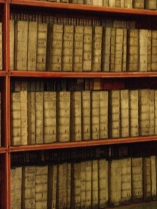 Perhaps the Strahov’s 18th-century visitors thought about these halls as we (seem to) think about the Internet, or as the unnamed users of Borges’s Library of Babel think, at least initially, about their institution:

When it was proclaimed that the Library contained all books, the first impression was one of extravagant happiness. All men felt themselves to be the masters of an intact and secret treasure. There was no personal or world problem whose eloquent solution did not exist in some hexagon.

On a day when Prague’s streets are slicked with ice and dangerous to navigate, when the news from the U.S. is grim, it’s heartening to remember the warmth that books possess. I’m hardly an Amazon fan, but I’ll give them