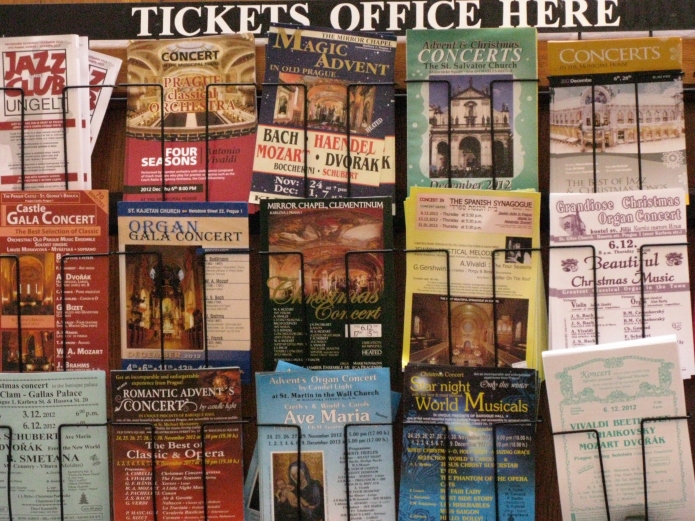 In our first week in Prague we’ve attended five concerts. This afternoon we see Don Giovanni at the Estates Theatre, where Mozart premiered the opera in 1787. We’re hoping it’ll be a bona fide production and not tourist schlock, though it can be hard to predict, especially when the venue is on the beaten tourist path. We’ve learned to avoid musical offerings that include the words “best of” or “greatest hits.”A violinist friend tells us the Czech phrase for ensembles that play what are clearly tourist-only concerts is “the who’s-available orchestra.”

The other night we chanced on a 5:30 p.m. concert by the Martinú Quartet in the recital hall at the Rudolfinum—two hours of complex, dense, impeccably performed string music for the astonishing sum of $7.50 a ticket. No schlock here—just dazzle, passion, the swell of instruments coming at each other like waves to a beach. As it happened, I’d loaded a batch of Virginia Woolf onto my Kindle that morning, and after the concert I read her 1921 essay “The String Quartet,” in which she writes:

“Here they come; four black figures, carrying instruments, and seat themselves facing the white squares under the downpour of light; rest the tips of their bows on the music stand; with a simultaneous movement lift them; lightly poise them, and looking across at the player opposite, the first violin counts one, two, three—”

I’m always hunting for the right book for the right trip. Too often I fail. It’s like trying to anticipate the clothes I’ll want or need, which is so much more than a matter of reading weather reports (here, too, I’ve failed: too much black, no jeans). I hadn’t thought of Woolf but suddenly the other day I wanted her—that companionable voice, that sharp and painterly eye—so I nabbed her from the Kindle store. To my knowledge she never visited Prague, but it’s as if she’s here now, and was with me three nights ago, listening to Debussy:

“The gentleman replies so fast to the lady, and she runs up the scale with such witty exchange of compliment now culminating in a sob of passion, that the words are indistinguishable though the meaning is plain enough—love, laughter, flight, pursuit, celestial bliss—all floated out on the gayest ripple of tender endearment—until the sound of the silver horns, at first far distant, gradually sounds more and more distinctly, as if seneschals were saluting the dawn or proclaiming ominously the escape of the lovers.”

The Martinú Quartet’s rendition of Debussy’s 1893 string quartet—his one and only—had been a gloriously tangled foray into sound, a liquid excursion into an underwater grotto, alternately furious and fragile, with ripples, yes, of “tender endearment …”

Unlike my musicologist husband, who at concerts zeroes in on things like key changes and harmonic development, my mind wanders. After a while I thought about the middle-aged man and woman in front of us at the Rudolfinum—he with hair like Einstein’s, she with something like a thatched roof atop her chiseled features. Or the elderly man beside me, with his scrimshawed face. Further down the row sat another man with a forehead as mottled as quail eggs. And a few more rows in front of us. a man who, before the concert began, held his program within a half-inch of his left eye and squinted; at intermission I saw him putting drops into the same eye, and I wondered how long before sight vanished altogether and he’d be left to absorb his music in the dark.

The later-afternoon concert drew a distinctly elderly crowd, with all manner of hunched and dragging and idle limbs, stooped shoulders, matted coiffures, spectacles and canes. I could only guess at the hardships these men and women had experienced—war, the aftermath of war, a half-century of Soviet occupation. I assumed the people around me were good guys, but maybe not? What if the man beside me was a former agent, a neighbor given to snitching on neighbors? (The cover story in this week’s Prague Post is about just such a man.)

“… it’s all a matter of flats and hats and sea gulls, or so it seems to be for a hundred people sitting here well dressed, walled in, furred, replete. Not that I can boast, since I too sit passive on a gilt chair, only turning the earth above a buried memory, as we all do, for there are signs, if I’m not mistaken, that we’re all recalling something, furtively seeking something. Why fidget? Why so anxious about the sit of cloaks; and gloves—whether to button or unbutton? Then watch that elderly face against the dark canvas, a moment ago urbane and flushed; now taciturn and sad, as if in shadow. Was it the sound of the second violin tuning in the ante-room?”